Previously, we conducted a formative study using cultural probes and interviews to get a better understanding of our users and their vision for the future of music. The insights from the study helped us brainstorm and come up with 3 promising concepts grounded in constraints such as acceptability, feasibility, and impact. Based on the feedback from our peers and further discussions among team members, we decided to focus on the concept of a looping mat that would support classical musicians practicing alone by connecting them musically with their instructors and peers.

As we continued with our research and design process, we realized that we would need consider how the wide variation in the practice of classical music might constrain our design. Classical musicians employ a variety of instruments. They practice or perform by themselves or in groups of various sizes. Every instrument is positioned in a different way and requires different types of movements from the musician. This led us to our next research question: What kind of form and types of interaction should the looping mat have to accommodate these variations?

We identified that we would need very specific insights into how musicians would use a foot controller for recording and playing musical segments. With this goal in mind, we conducted a user enactment study by placing an open-ended design prototype of a looping mat in the context of a musician’s practice room.

After analyzing the results from the cultural probe and interviews, we picked the concept of a looping mat and designed a user enactment matrix with three dimensions – activity, reactivity, and ownership. We developed eight user enactment scenarios based on the matrix, and piloted these scenarios class. 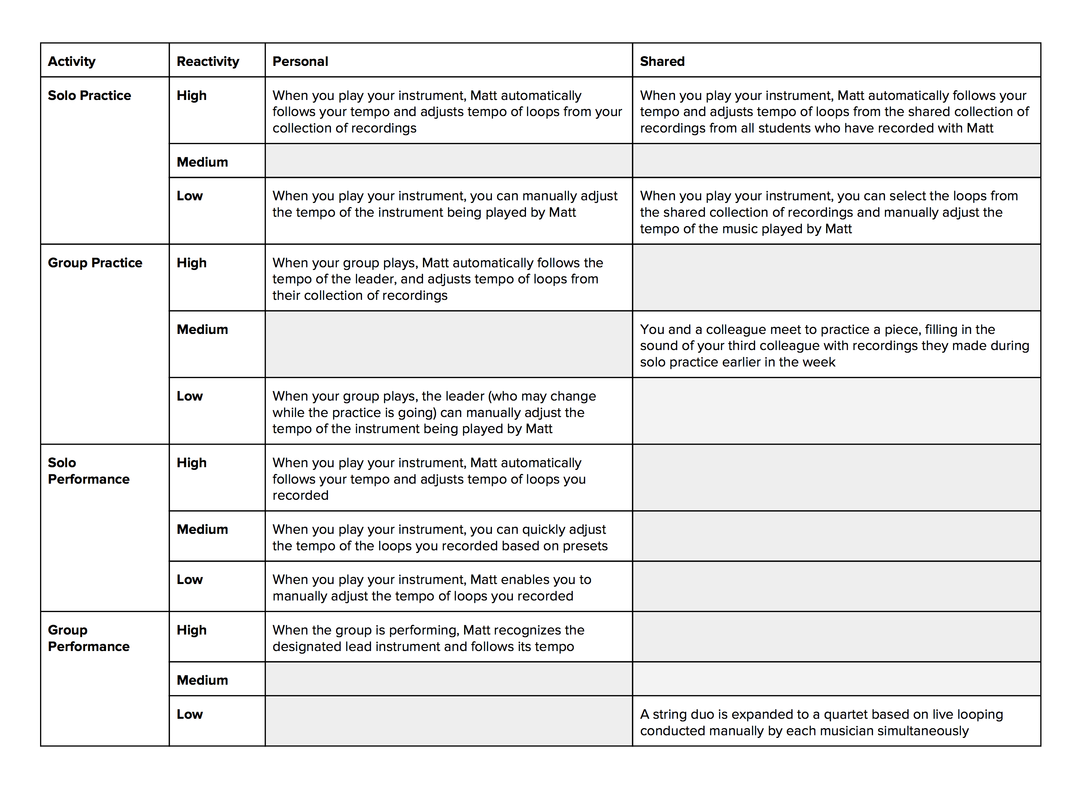 After conducting the two pilot User Enactment studies in class, we gained feedback that indicated we would need to narrow our concept’s scope slightly to make its purpose clearer to our users. We decided to adjust the dimensions of our matrix to reflect our concept’s use in solo practice only.
​
We conducted online research on foot controllers, looping and generative music, by watching videos on YouTube and looking at descriptions of foot controlled products available today. We were especially influenced by Loopy HD, a looping based composer for the iPad. To get further insights into how musicians currently play a foot controlled instrument, we observed a carillon performance by Prof. Tiffany Ng at the Burton Tower at the University of Michigan.
​ 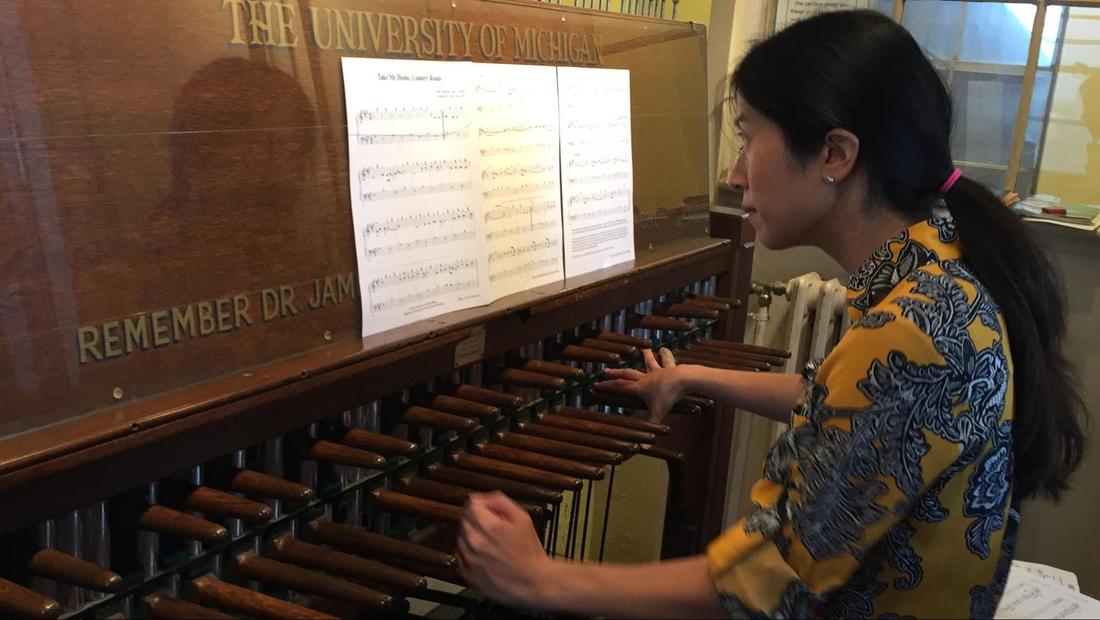 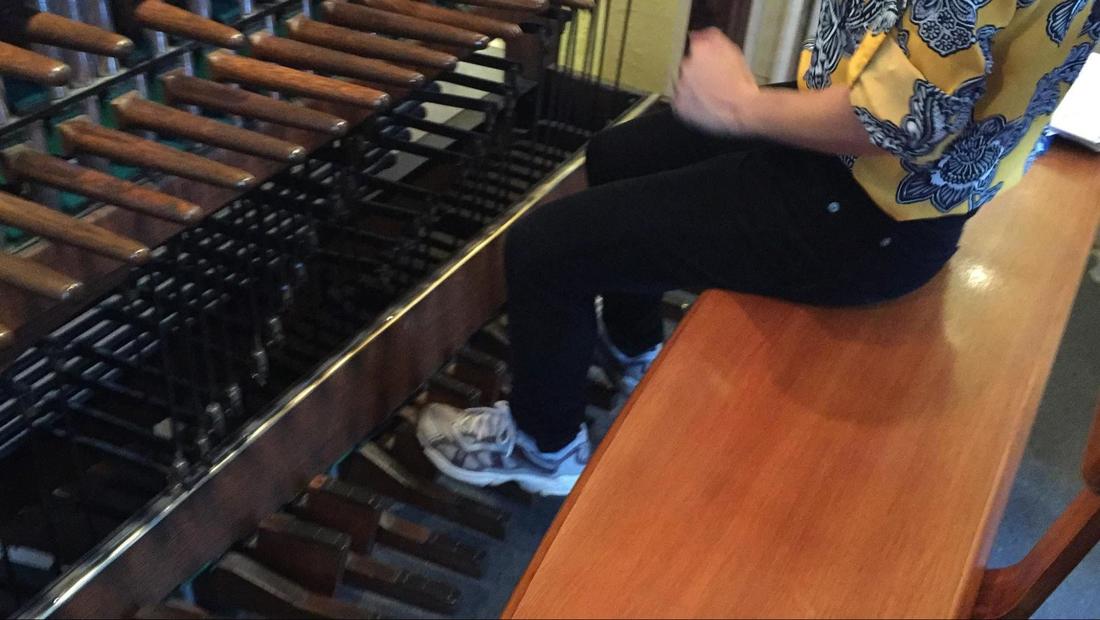 Based on our research and further discussions, we revised our user enactment matrix and scenarios to address potential interactions with foot-operated buttons, pedals, and/or foot-based gestures. We kept the dimension regarding personal/shared use, as we learned from our pilot studies that ownership type could impact how users engage with the device. We also narrowed down our focus to recording long tracks for practice, instead of looping or synthesizing clips. Our final revised scenarios tested different foot interfaces and different levels of engagement with external devices and other people.


Our study was designed to take place in a practice room at the music school, with a chair and a music stand. We provided a ukulele as a prop instrument to evoke the feeling of practicing an instrument. To test the efficiency of different foot interfaces, we drew out a number of functions/buttons that are commonly found in musical contexts- play, pause, stop, record, tune, metronome- and asked participants to stick the buttons on the interface in locations that would be convenient for them to use while playing their primary instrument.
​
We recruited three music school students on the spot and also tested with two students from other schools who had at least 10 years of experience with playing an instrument. Each team member took different roles including conducting user enactments, note taking, photo taking, and participant recruiting. Team members asked questions to the participants at points of interest during the studies, and debrief questions at the end of each study.

Among our five participants, one plays saxophone, three of them take piano as their primary instrument, and one plays cello. When conducting the study, we found that all of them chose to sit on a chair while completing the following tasks. This is very different from what we anticipated when designing the prototypes, as we imagined more of a scenario where the musician would stand and practice. We probably should have invited participants whose instrument may require a standing position like violin or upright bass.

​Another thing we learned was that piano players have unique requirements. The piano itself has pedals, which the player operates by foot from time to time. Also, considering the big size of a piano, it will block player’s vision of their feet. The above two limitations strongly affect our mat design. As one participant suggested, we probably need to design two different mat models, one specifically for piano players and one for others.​ 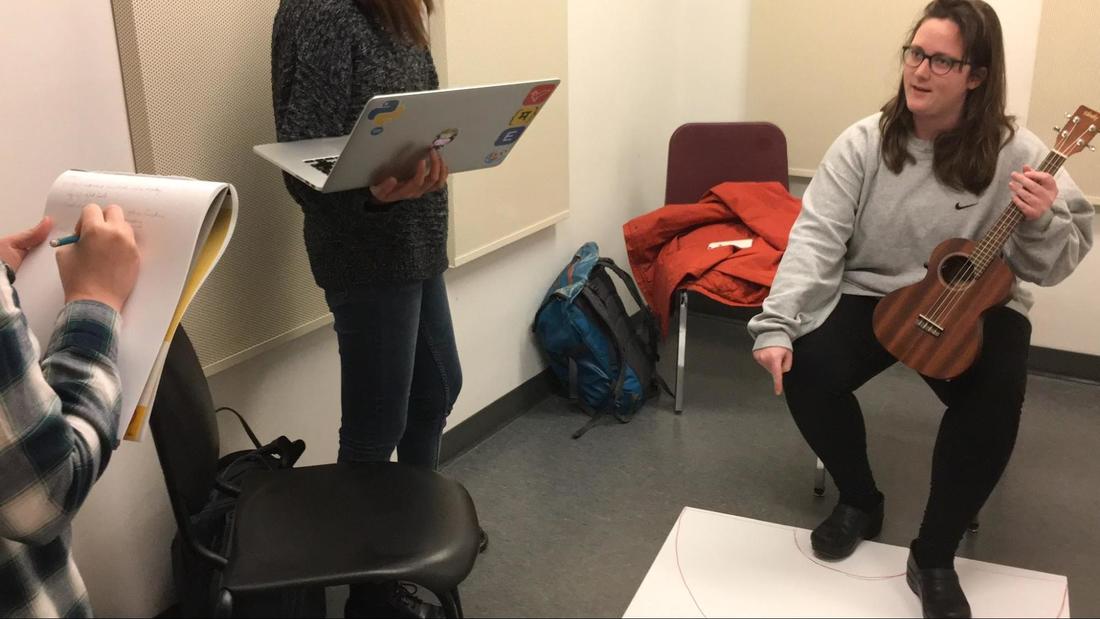 ​We built a virtual affinity wall based on our observations and interviews during the five user enactments. Overall, we gained insights in the following 6 aspects.
​

We individually sketched new design ideas based on the insights from user enactments and came together to discuss. Our new ideas all point to the direction of a simpler, smaller foot interface and pairing the device with a display to enable more features with simple foot controls. 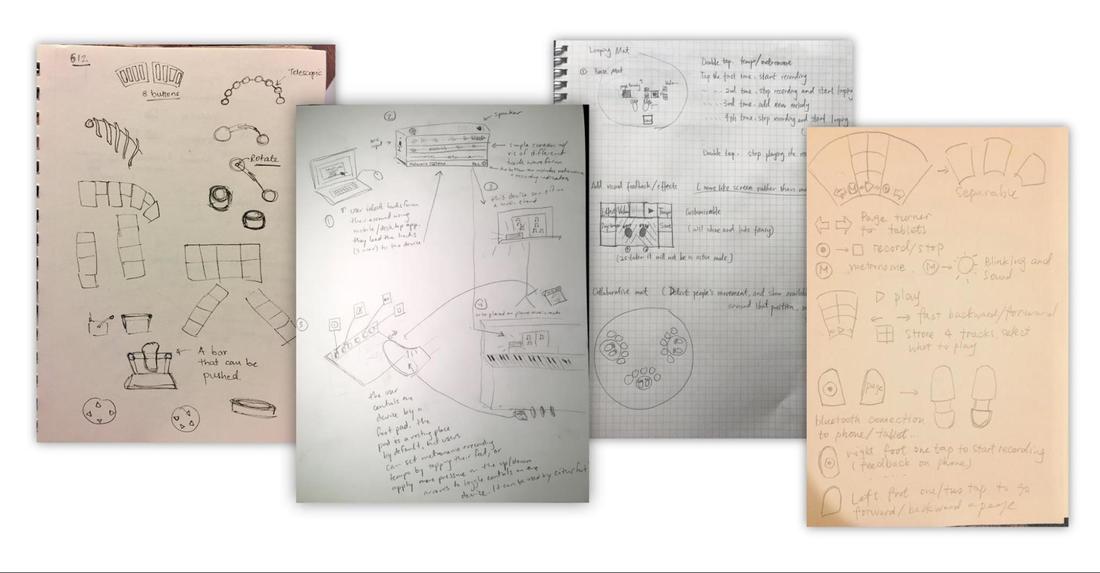 However, we could not reach a consensus on what kind of screen–speaker–mic combination should the device have. So, we decided to consider further variations of the device. 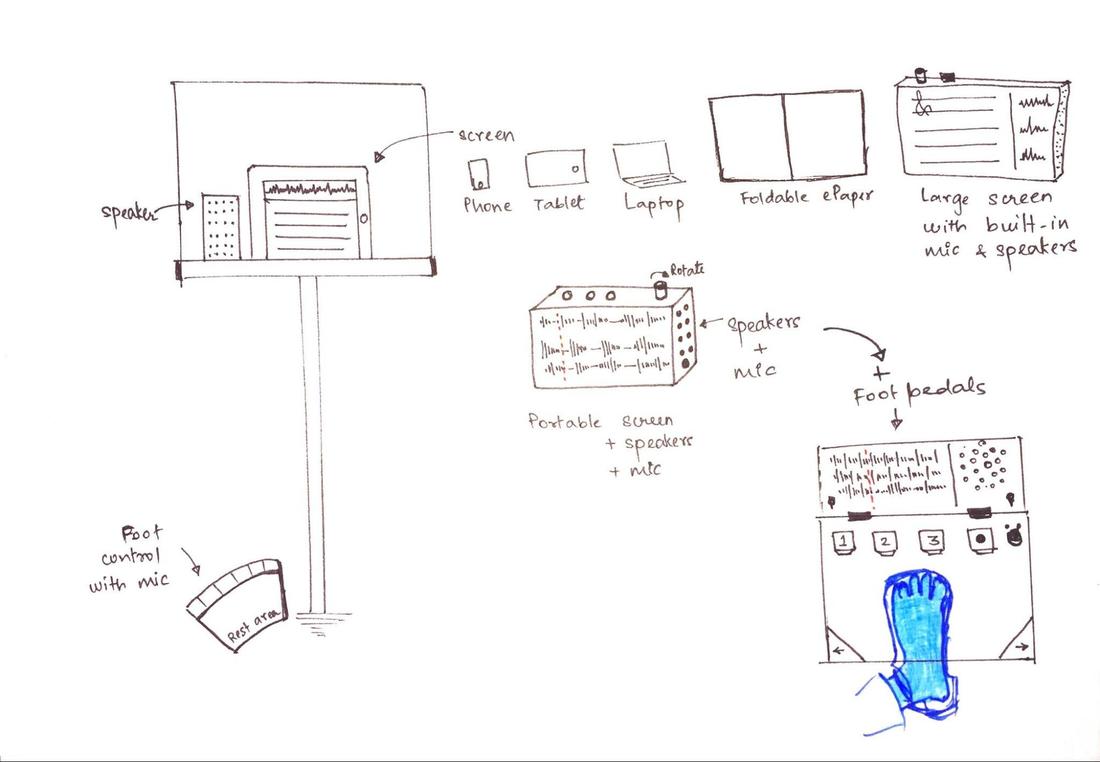 To select among these options, we revisited our selection criteria from Milestone 2 and made some modifications based on our new findings. Then, we noted down the pros and cons based on these criteria. 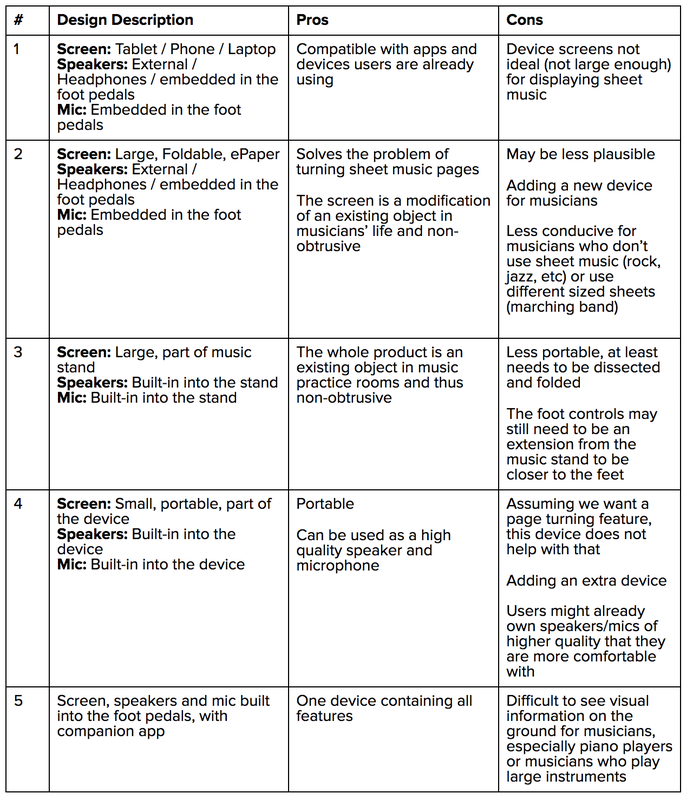 Ultimately, we decided Design #4 best fit our evaluation criteria and would fit into not only the practice spaces utilized by classical musicians, but could also be suitable for musicians practicing contemporary styles (jazz, rock, etc) as well.

​We propose foot-controlled mat and speaker combination that facilitates solo practicing activities of classical musicians. It allows musicians to record and listen to the music they play, load companion music recorded by others to play while they practice, and share the music they recorded with friends.

Based on our research and the feedback from user enactment studies, we are going to implement the following features:
​ 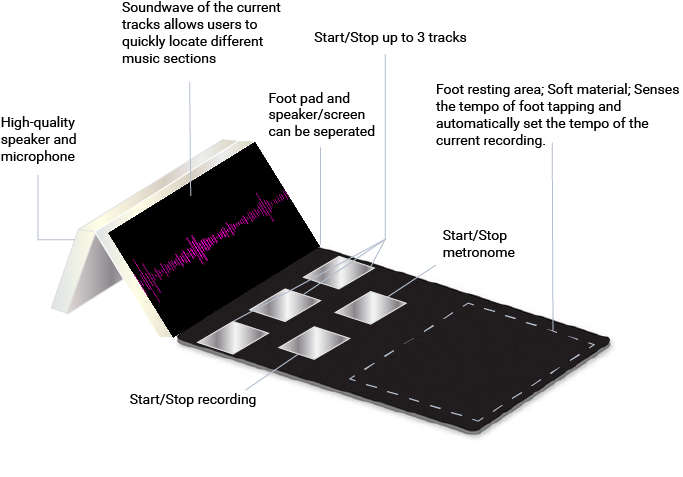 The device's portable design enables music students to carry it with them. During a practice session, the user will switch on the device and place it near their left or right foot. Optionally, they can detach the screen, and place it on a table or music stand.

When the music student starts playing, they can rest their foot on the pad, tap their foot in rhythm, and the device will set the recording or metronome tempo automatically. The student can start and stop recording by tapping the left-most button.

When the student is listening to companion tracks while practicing, she/he can navigate to different parts of the piece by sliding a knob at the top of the speaker, which will move the needle along the sound wave on the speaker's visual interface.

After the practice session, the student can share their recordings by syncing the speaker to their smart phones and sending it to other connections in their network. They can also load music from other devices for their next practice session.​

Members of a band can share a device in their practice room and store recordings in the buttons on the pad, so that each person can access other parts easily when they practice alone. 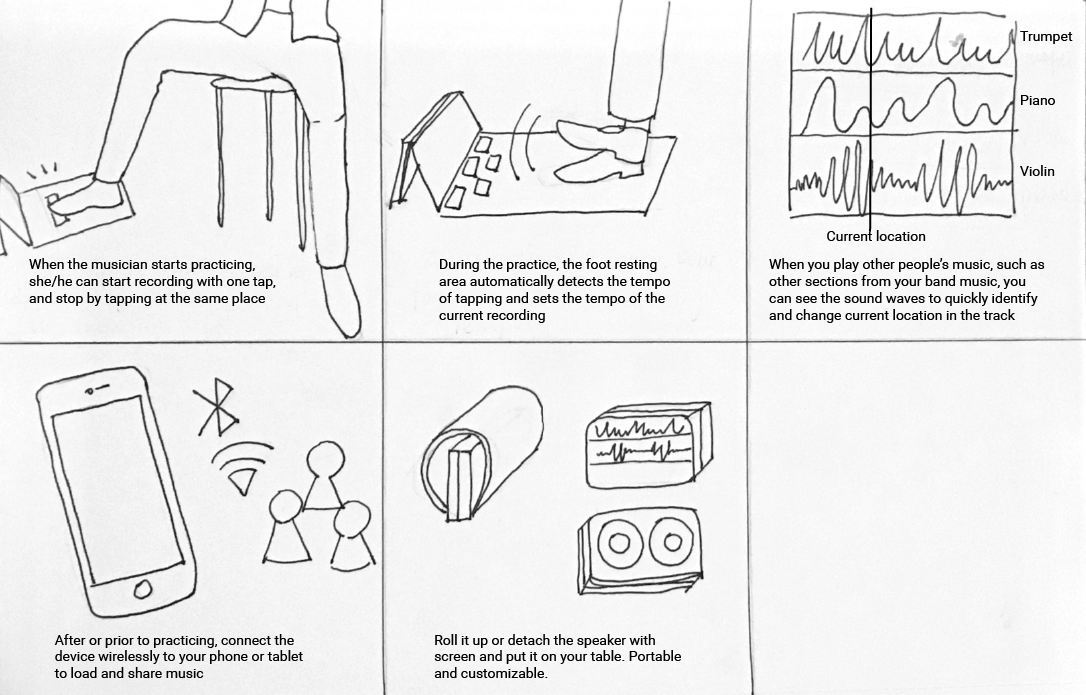 Although it is a popular request, we will not be adding sheet music page turning in the first version of the product. One reason is currently different people have different solutions: some use iPads, some use other specific equipment. We are not sure if we want to reproduce another automatic music page turner or if the users would replace the device they are using with our new design. Another reason is not many people actually buy such a product even though there are many on the market. Is it because of the price, portability or utility? More user research needs to be done if we want to go deeper in this area.

This design is highly plausible and can be implemented with current technologies. In further iterations, however, we also need to consider variations in material and construction. For example, what material would the user like to see for the pad? Currently, plan to use a soft material to dampen tapping sounds that could be picked up from the microphone, but there will be a big difference between silicone, carpet, or other materials. While the silicone pad can be cleaned easily, carpet has a more comfortable and warm feeling. In terms of speaker quality and mic optimization, we think technology will develop dramatically if we set a 10 year timeframe. In that time, the speaker may have a higher sound quality without occupying such a large space, and the mic may be able to detect the sound in high quality wherever it is placed.

Our demo presentation will be based on our system proposal. There are three main steps in this simulated experience:


To demonstrate the first step, we have decided to use large arcade buttons with LED to act as triggers. The buttons will be embedded on the pad and get triggered once they have been tapped. We will also put force sensors under the foot resting area to detect the tempo of the tapping. This part is pretty plausible. Due to skill limitation, we may not be able to build an embedded response system. Instead, we will connect the buttons and sensors to a laptop computer which will work as the recording and playback device. For the screen display, we plan to use a smartphone or a tablet encased in a 3D printed shell. The input data will be sent to the laptop for analysis, and the final visualization will be sent back to the smartphone/tablet to display. In a 10 year timeframe, the mic and speaker may be able to have a high quality while not occupying too much space. But for this prototype, we will use the phone to act as the mic and speaker. Lastly, we decide to 3D print the entire folding structure. The shape of the case will be carefully designed to achieve an optimal acoustic effect when a phone is put inside. 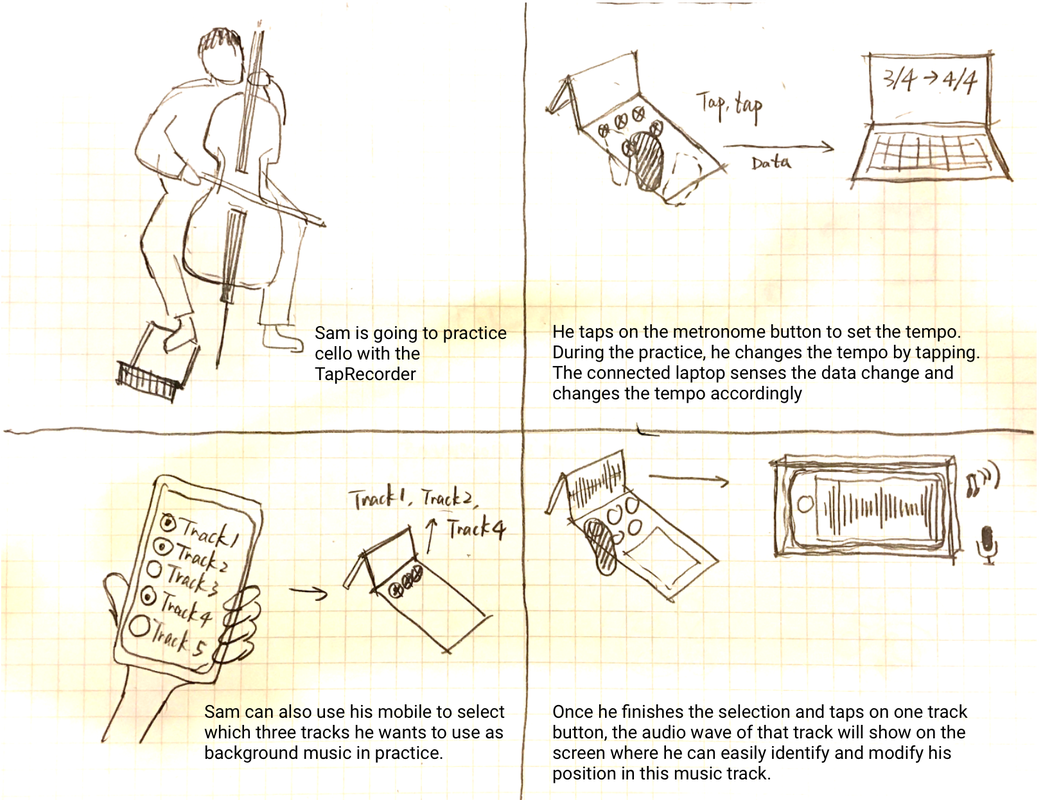 As we conclude Milestone 3, we have narrowed down our concept based on more extensive research with our target user group; we have a clear vision of how, when, and where it will be used, and by whom; and we have identified clear interactions with the system and have prioritized features of the user interface, both graphically and kinetically. We have a clear plan for building our prototype and demonstrating the system. Some questions do remain, however. We will need to do some testing to find the optimal position for the speaker and mic (e.g. height, angle, distance from instrument). We also want to test between physical buttons and touch screens to identify which forms classical musicians prefer, and which form may have fewer distractions and be easier to use during the practice. Our User Enactments gave us valuable information on macro-interactions, but as we move forward, we will need to potentially conduct some additional rapid prototyping to identify the most effective micro-interactions with individual buttons on the footpad as well as the detachable speaker/microphone/graphical interface.